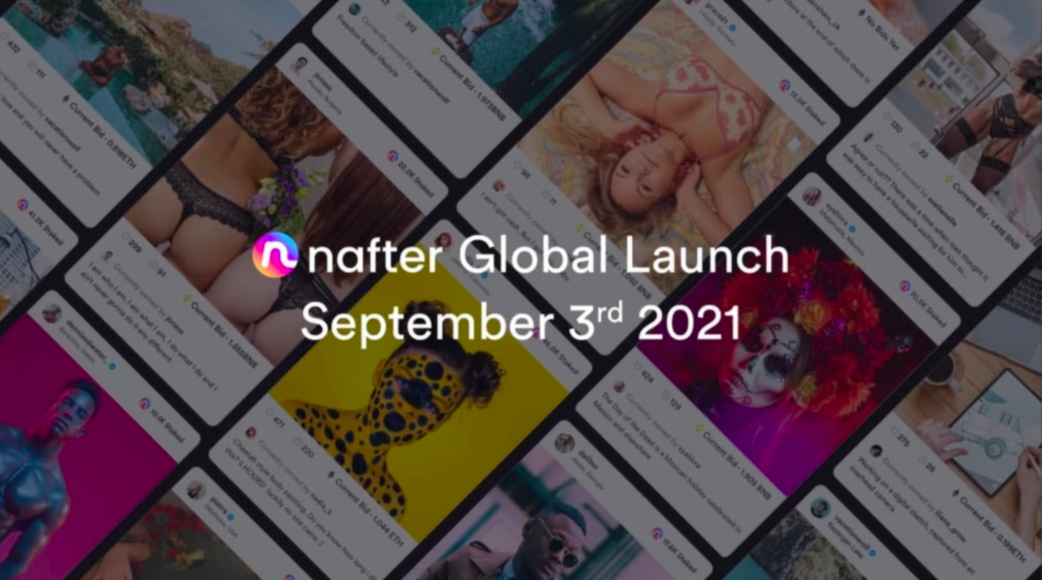 The age of Non-Fungible Tokens is now and it has arrived in an astounding manner growing to over $11 billion in just two quarters of 2021. There have been a number of NFT use cases that have proved to be a game changer and Nafter is doing something similar with the world’s first NFT social network and marketplace. Nafter is all set to release the global web app and mobile web app on September 3rd that could change the way social network interactions happen.

The NFT based social network would focus on Content as the guiding principle where influencers can mint NFTs based on their social media content. We all know how social media has elevated influencers to celebrity status and the platform is only going to take that interaction to a new level. Influencers can mint their social media posts be it a photo or a video or an announcement into an NFT and put it up for sale in auction or direct purchase option. Fans can participate in the auction based on the tier they belong to and own a unique price of their favorite influencer NFT.

The era of NFT is taking every industry by storm and Nafter has taken a lead in finding the perfect NFT use case for social networks leaving Instagram and Facebook behind. Insider reports have indicated both Facebook and Instagram have NFT aspirations but Nafter had definitely beaten them to it. The world’s first NFT content based social network could take advantage of being the industry first and take a leap in the right direction.

The rise and popularity of NFTs have sent the prices of some of the oldest digital collectibles from four years back attracting million-dollar bids. The NFT marketplace OpenSea has become the top auction house while traditional auction houses have turned to NFT auctions in light of its popularity. The fact that NFTs were initially invented to be used by fans as a way of social interactions for sports fans, Nafter is only taking that experience to the next level.

A month ago Nafter team has released a Desktop and Mobile design demo, where the community could get an idea of the future app and how it will work. And now this Demo turns into a real working web app.

The platform has introduced a tier system for fans to participate and get equal opportunity to bet for their favorite influencer NFT. The Nafter pool tier would allow fans to stake native tokens and make the most of the NFT marketplace. Some of the key features of the platform include,

Nafter Can Give Social Media Platforms a Run For Their Money

We all know the craze for social media influencers and the thinning line between what social media popularity can bring you. Some of the most recent examples include Logan Paul whose social media influencer tag made him fight Floyd Mayweather, arguably the greatest boxer. This is the power of social networks and Nafter is only taking this power to create a new NFT ecosystem.

The NFTs won’t be just collectible but also have a great secondary market value, given the unique nature and rising demand. For example, CryptoPunk NFTs which were once given out for free are now being sold for millions of dollars, which has attracted the likes of VISA, Logan Paul and Steph Curry to invest in these JPEG NFT arts. Similarly, an important photo of an influencer can bring a similar value and demand. Photo houses were ready to pay millions to celebrities for their first kid’s photo or private photo of a vacation, imagine if a celebrity mint that photo and auction it as NFT what value can it bring.

Nafter’s global launch could propel into the league of selected projects with game-changing use cases that might get copied as we move forward. Many more social media platforms might come up with similar design and working, but Nafter is ensuring the unique ecosystem not just offers an out of the world interaction but also an investment opportunity.

Investing in the Brainpower Coinstore Labs, Coinstore.com makes a shining debut in the new...

Synergy Integrates Social Media and E-commerce to Create a Platform that will Transform the...