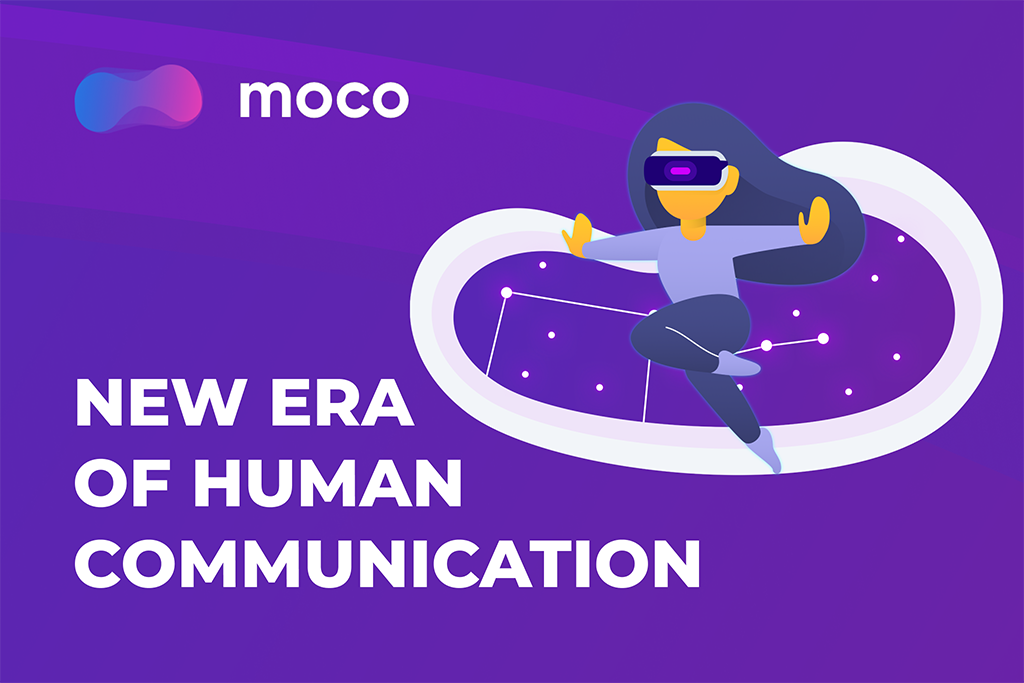 VR Motion Communications which plans to reach half a million downloads of its 3D and 4K VRsocial media apps by 2022, begins the Initial Exchange Offering in September. The IEO stage will mark the end of the funding round for the communication platform,MoCo. The project introduces high-tech services in three stages,social media – anonymous 3D Avatar Chat named “MoMoCo”, 4K/8K Live and Streaming services, and 3D/VR Live Video Chat. The project is initially based on the Ethereum blockchain.

Social platforms are often accused of being humanless. Although users can easily reach out to their peers, they can’t touch them, read gestures or facial expressions. Trying to add emotion to online communication, market leaders have introduced video streams, stories, and even voice messages.

VR technology is the latest trend promising to be the future of social media. In 2014, Mark Zuckerberg acquired Oculus VR – a company specializing in virtual reality hardware and software. Later Facebook launched Facebook Spaces that lets users interact with friends using a VR device. Today 77% of VR headset owners say they are interested in socializing via VR, as well as playing games and watching videos.

VR technology has the potential to rethink online communication as we know it today. It brings a “face-to-face” experience – allowing one to feel as though a friend is standing in the same room with them.

The launch of the first stage, MoMoCo 3D Avatar App, is scheduled for 2020–2021. By 2022, the tech startup intends to surpass 500K downloads. The main competitive advantage of MoMoCo chat is not that much about 3D, but about anonymity and personal data security. The application will be the first anonymous 3D Mobile Communication channel. By interacting through a 3D avatar alter ego via smartphone or webcam, users will be able to safely enjoy “an alternate life” while chatting, meeting up or even falling in love.

In addition to basic chat features, MoMoCo Chat offers social games, 3D Avatar trading marketplace, incentive system and “Fight Club” battle challenge game. Their online marketplace will include an official store for purchasing official avatars and avatar-related content and a free marketplace where users will be able to monetize their original avatar-related content. The copyrights for avatars and created goods will be secured with blockchain technology.

The MoCo streaming service will allow the MoCo Platform and other real-world business partners to edit, process and broadcast the highest quality video formats – 4K/8K, 360° Real Time, which is currently not possible with typical editing and processing technologies.

The company has already got a patent for the technology allowing this. It’s called AI Video Compression. It allows reducing 4K/8K content data by 99% of its original size without losing quality. Thanks to the compressor, HD videos will be available to users in their usual devices: TV’s, computers and mobile phones.

The MoCo streaming technology will facilitate the broadcasting of popular sports events, including the World Cup Soccer games and even the Super Bowl. 4K/8K quality and augmented reality will make this experience unique for any sports fan. Video and streaming copyrights will also be controlled by smart contracts. Real-world partners in this stage will purchase services using the MoCo Token.

The company’s most advanced products are pending a patent and will be fully released by Q4 of 2022. AI Motion Capture and Image Analysis will allow anyone to create and participate in virtual worlds with a regular phone or webcam. The technologies collect visual and sensory data, translating it into HD 3D representation of the original subject. The objects can be guided by a user via a smartphone.

MoCo Token in the MoCo Platform

The platform’s internal currency is called MoMoCoins. A user will be able to buy it in-app via Google or Apple Stores or simply earn it by participating in the MoCo Platform. A person wins coins by communicating and playing games within the MoMoCo 3D Avatar Chat application.

What’s more, MoMoCoins can be exchanged for real cryptocurrency (MoCo Tokens) on the official web-based MoCo Token Exchange at a fixed rate.

Similarly, crypto owners can buy more game coins with their cryptocurrency on the exchange and with a large discount and participate in the platform again to earn even more MoMoCoins. The project’s team believes that such a win-win economy stimulates active transactions with the MoCo Token, thus fostering a high volume of use of the MoCo Token and the MoCo project itself.

How to Join the MoCo Platform

The MoCo project is winding down its rounds of funding, so now, the IEO is the only way to take part in the venture today. Tokens will be available for sale exclusively (with a special Bonus) in September and October:

“The interest towards the MoCo platform, VR and 3D in social networks will grow. Today’s users require more gamification, more interaction and a truly unique social experience. We can give them that. Our team members have extensive expertise in the production of Live 360° broadcasting systems, VR, artificial intelligence and social app development. We have technologies, and professionals to bring a new generation of online communication to people”.

MoCo Tokens will get listed on exchanges starting with P2pB2B.io on October 29th. Since then the MoCo cryptocurrency will be available for purchase on the official website only at the market price without any bonuses. Save the date for MoCo IEO and join it from 16 September to 14 October to take advantage of the bonus buying opportunity.