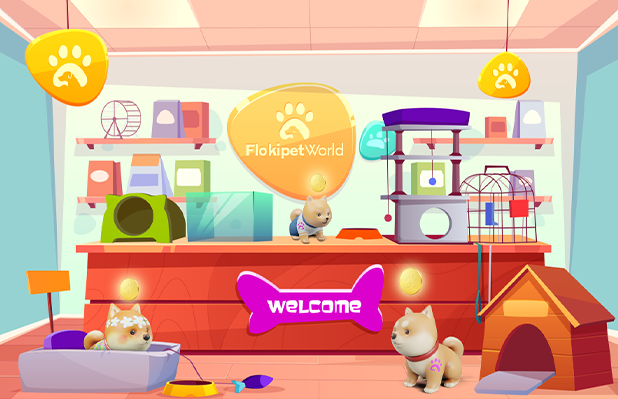 Flokipetworld, a meme coin inspired by Floki & NFT announced the launch of its IDO on 12th November on IDOScan platform. The Meme NFT project brings the most adorable Floki pets on the blockchain. Users can trade, collect and diversify their portfolio with a tokenized Meme Economy. $Fpet is the native defi coin that has the potential to make it big and become the next Shiba Inu. Floki Pet World is not just another meme currency just made for fun, it has been built on the principles of Defi and incorporates NFTs to make the best of both worlds.

Meme currencies have also gone mainstream this bull season among various other types of crypto assets. Meme currencies proved that community driven projects have a long way to go. First Dogecoin rose over 5000% and then Shiba Inu overtook it in October with a yearly rise of over a million percent. Meme currencies evolved from being just a joke coin to become a formidable investment option, where many new investors who held onto their meme currencies became crypto millionaires. Thus, it is clear that meme currencies also have a market and Floki Pet World aims to take the meme currency ecosystem to the next level.

Today Non Fungible Tokens aka NFTs have become a rage where people are spending millions on JPEGs, but as weird as it might sound, it is the new norm and would be a big part of digital collectibles in the coming years. NFTs were first created back in 2016 as a form of tokenizing securities and using it as a fan token for premier sports clubs. However, in 2017 NFTs burst into the mainstream with Bepple’s digital painting fetching $69 million and more importantly it gave a worldwide exposure to the NFT market. Since then old NFT collections of rock images have fetched millions. Now Floki Pet World is taking this concept to the meme currency world and aims to become the first platform to bring NFTs to the meme currency ecosystem.

Why is Floki Pet World the Future of Meme Currencies?

Floki Pet World combines the best of both the world i.e it will be a great meme currency, but with a goal and aim to merge the NFT hype. In fact, looking at the concept of meme currencies and NFTs, it seems both are a perfect fit for each other and Floki Pet World is here to revamp that and make it possible. It would offer a range of rare Floki NFT collections that traders can buy and resell to make profits while the native currency can also be used as a form of passive income with loads of opportunities. Some of the key features of the platform include,

While most of the meme currencies today only offer income opportunities during a bull market which many miss due to hundreds of tokens being out there. Floki Pet would offer staking services where users can stake unique NFTs to earn the native token and then use the native token to buy,sell or trade.

Play to Earn or P2E games have become the latest rage in the NFT market as it combines the best of gaming industry and crypto market. Users can play the games and earn in-game token rewards as well as rare NFTs which can be utilized to make extra income. Floki with a plan to conquer the NFT and meme market would also launch a 2d powered blockchain play to earn game where users floki pets will earn them Fpet rewards! It’s already in development and will be released in Q1 2022.

The game brings new users to the platform and also helps it expand the user base. Once the game is launched the Floki pet world ecosystem would become more lucrative for traders. The platform aims to build a community focused ecosystem so that one can get as many facilities as possible from one place.

Non-Fungible Defi (NFD): The Best of NFT and Defi in One Platform