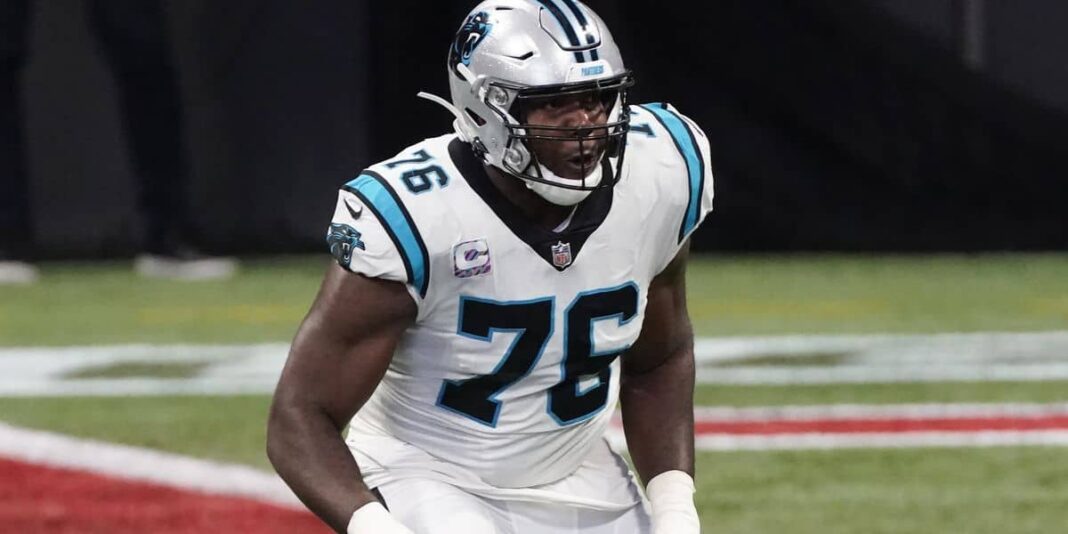 Russell Okung is good at playing sports, but for him, Bitcoin is not a game. That’s why he’s choosing to receive $6.5 million from his salary in BTC.

Carolina Panthers tackle Russell Okung is doubling up his Bitcoin game. The well-known Bitcoin evangelist announced that he would receive 50% of his total salary in Bitcoin.

This makes Russell Okung the first NFL player to be paid with Bitcoin —or any crypto to be fair, giving BTC a further boost as it keeps making headlines in recent weeks with news of more adoption and interest from institutional investors.

A $6.5 Million Touchdown for BTC
The initiative must be approved by both the NFL and the NFL Players Association, but everything seems to point to everything being ready to move forward. Okung himself confirmed the news on his social media.

Russell Okung had expressed his interest in accepting Bitcoin as payment back in 2019; however, there was nothing official during that year. Today, Okung replied to his own tweet, basically saying that his wish came true.

Russell Okung will receive his Bitcoins thanks to Zap’s intermediation. Zap is the startup behind Strike, a platform that converts fiat payments to Bitcoin. The company assured that other top athletes are also interested in BTC.

Doing the maths, Russell Okung would be receiving $6.5 Million in Bitcoin, considering that his 2020 salary is agreed at $13 Million. If he was granted his wish back in 2019, when BTC was hovering around $7400, his current holdings would add up to $29.86 million… Wow!

Okung is joining a list of celebrities that are showing Bitcoin some love. Other stars with the same interest are the rap stars Logic, Nas and Megan Thee Stallion, Maisie Williams, and even the NFL cornerback Richard Sherman.

Bitcoin Is Much More Than Money For Russell Okung
Okung has carried out several campaigns to promote the use of Bitcoin and the philosophy behind Bitcoin as a way to free people from the control exercised by the traditional fiat system. He’s co-founder of the BitcoinIs Podcast, which focuses on discussing Bitcoin-related issues.

George Mekhail, Co-Founder of BitcoinIs told Cryptopotato that Russell’s decision would be one more way to promote the use of Bitcoin and the podcast’s philosophy:

“The Bitcoin circular economy is something BitcoinIs was focused on for much of 2020 and 2021 will be even bigger now thanks to the great work of Russell Okung and Strike App.”

A circular economy is a form of behavior that seeks to reduce as much waste as possible by maximizing efficiency. Bitcoin can solve that problem because of its non-inflationary, electronic, and decentralized characteristics. Just as a reference, the cost of producing a $100 bill is almost 20 cents, and the Federal Reserve can print infinite amounts of money, which decreases people’s purchasing power.

On the other hand, there’s a predetermined amount of Bitcoins issued every 10 minutes, and every four years, the rate decreases to 50%. This eventually appreciates the purchasing power of hodlers and is one of the reasons that helped Bitcoin go up in price in 2020.

The problem with the modern payment market is that hug coins are the solution.