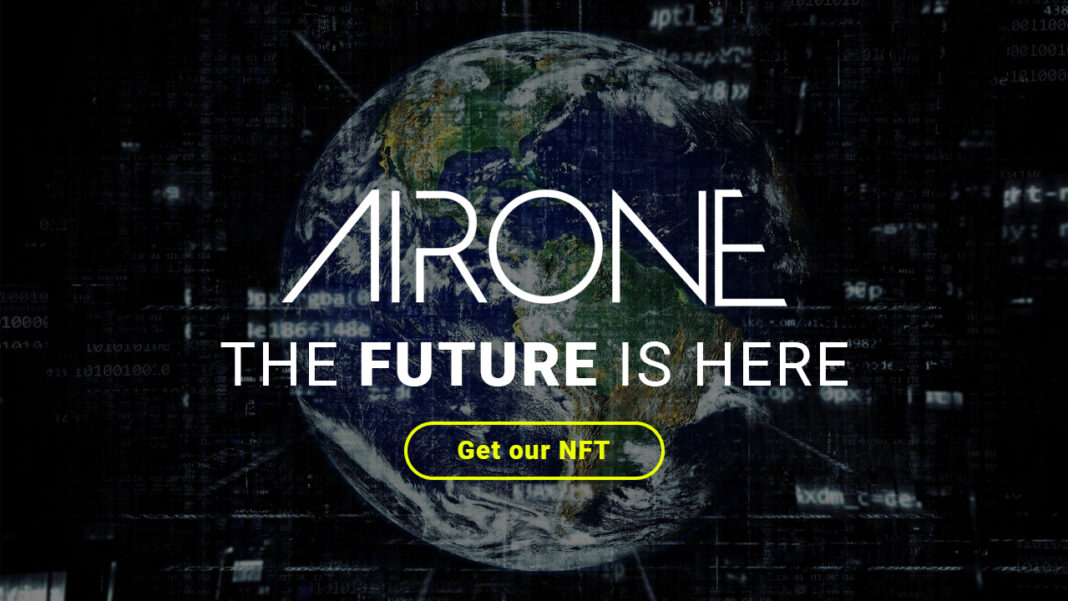 The NFT mania has hit the mainstream with nearly every other popular brand and celebrity indulging in the NFT mania. Non-Fungible Token (NFT) was first launched in 2012-13 and primarily used as a fan token by sports premier league clubs. However, its popularity and use case skyrocketed this bull summer and gained international press when digital artist Beeple sold his art for $69 million. Since then the NFT craze has only gone higher and every other major mainstream brand and celebrity has leveraged some form of NFT collaboration to promote their new product or services. AirOne is also banking on the same and aims to launch a crypto funding model for its Drone company.

AirOne is a cutting-edge drone company focused on the future of safety and security and founded by tech innovator Evan Jasek. The drones from AirOne are designed to communicate with ground patrol to create a safe flying environment that will aid in security surveillance, property inspection, public safety, data collection, and police air assistance. Our top-of-the-line product provides limitless options for ensuring a safe and efficient future. Airone doesn’t try to be unique. Instead, we intend to push the boundaries, effectively blurring the distinction between what is fictional and what is real.

As much as innovation is a huge leap forward in the process of any product launch in the marketplace, the financial side is just as important AirOne is going to do it all without giving up any equity in the company by running a series of funding through crypto, starting with the limited NFT that will get you presale access to the coin launch in Q4 of 2021 to fulfill the Series A funding. The project understands that most of the world would call it unconventional for being a drone company. However, the creators of the project like to explore the unknown and innovate every step of the way. The goal is to make the world a better, safer, and more innovative place.

What Makes AirOne More Than a Drone Company

The decision to go the crypto way for a drone company might have been one of the longest discussions and probably the most important one. The traditional funding ecosystem is saturated with centralized control on the market which makes it difficult and near impossible for new projects with ideas to move forward, but they often fail because they don’t have the capital to bring their idea to reality. And even when small projects do get funding, it’s often instead of a high stake that changes the core and functionality of the company. This is why  Evan Jasek wanted AirOne to go with the crypto funding model as they didn’t want to compromise on the equity. This makes AirOne a kind of Drone firm.

The Estimated launch date of the project is December of 2021. The project sees crypto as the future of banking, funding, and trading on a universal platform. This is just the beginning and thus despite being a  drone company, it decided to use a crypto funding model. Running and operating their NFT and coin fulfills the series A funding without giving up any equity in the company. This was done with a vision to not get disrupted by outside shareholders. It provides early AirOne NFT and coin adopters to see substantial growth. Once a user purchases their AirOne NFT, they will automatically receive access! Their AirOne tokens will automatically be distributed towards the wallet address that was used to purchase the NFT.

The Limited series NFT available via pre-sale could go a long way in the NFT collectible market given its the first company of its kind to do so. The rare set of very limited NFT collections would not just fulfill the funding goals but would also cultivate liquidity and value for the native token AirOne coin.

How AirOne Aims to Break Into the Crowded Drone Market’

Apart from the unique selling point about its crypto integration, AirOne also proves to be a beast in building quality drones. The firm aims to redefine public safety with its line of products such as offering visual aid for public crimes, traffic accidents, theft, and search and rescue operations. However, the product is being developed only with commercial purposes in mind especially law enforcement and other agencies rather than for personal use.

AirOne might be working on a production model that’s strictly for commercial use but it has dismissed the chance of building products that would be available to the tech-savvy common public. The drone model is intended to assist with security, safety, and data analytics. The design of the AirOne is also unique and circular, keeping safety a top priority. Unlike open propellers, which are dangerous and can quickly fail if they come into contact with other objects, AirOne designed Peak to be unaffected by these obstacles. Instead, the drone can collide with objects, withstand human interference, and remain unaffected by external factors. Aside from all of the safety features and innovative tech behind the shape, the design resembles a UFO, which distinguishes it from other drones on the market.

To get the NFTs please visit Aironenft. tech

2local is selling limited shares of 2local, starting at $5,000